Avatar
Now let’s talk about Avatar. The battles shown in Avatar attracted me to think about it the very first time I saw it. It was a battle of lost opportunity for the Na'vi as I think.
Charge of Na'vi cavalry:
What happened: The Na'vis essentially ran into a slaughter by charging into the human line head on exposing themselves to overwhelming firepower of their opponent which caused them to be annihilated almost entirely creating a rout.

What could happen: They could take their advantage of terrain and mobility to attack the flanks of human line. The movie does not show the human flanks but provided they didn’t adopt a square formation and didn’t anchor their flanks on a terrain impassable to Na'vis they would be vulnerable to the cavalry charge unable to bear their superior firepower upon their opponent.
Problems with such approach: The Na'vis would have been robbed of their advantage if the humans adopted a square formation or anchored their flanks to an impassable terrain. Moreover considering their lack of firepower they could have been overwhelmed by relatively small number of enemy troops able to provide fire support to the flank under attack.
http://battledreamer.agnibho.com
Dogfight between Na'vis and human aircrafts:
What happened: Na'vis took a wise approach by diving upon their opponents with an element of surprise. But was soon overwhelmed by the superior firepower of the enemy and was annihilated instead of their valour. 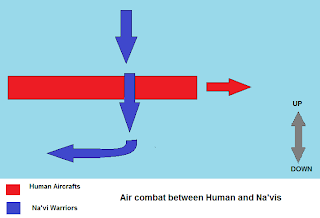 What could happen: The Na'vis could have taken a hit and run approach by destroying as much aircraft as could be destroyed in a single blow and then continuing their dive below and to the rearward of their enemy thus preserving their speed. The human would have two options now. Either they had to let the Na'vis escape, allowing Na'vis to regain their altitude and dive upon them again, or they had to detach their escort aircrafts to chase down the Na'vis, making their capital aircrafts, stronger but less agile ones, vulnerable to attack by a reserve Na'vi force.
Problems with such approach: If the ground and air force of humans could not be separated and remain able to provide mutual fire support this tactics would not be viable since Na'vis could not dive low enough due to ground fire. This tactics largely depends on agility and element of surprise. They would lose element of surprise after first attack and hence would be less effective in later course of battle. It is also time consuming and since human force was to bombard their Tree of Souls time was not on their side.
http://battledreamer.agnibho.com
Posted by Agnibho Mondal at Thursday, March 08, 2012