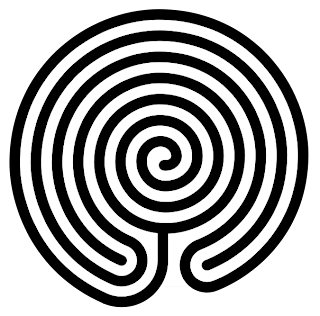 What is Chakravyuha: Chakravyuha is a spiral army formation like a blooming lotus when viewed from above. It usually has seven concentric rings of warriors. These rings usually rotate clockwise or anticlockwise. The Maharathis are placed in key positions for maximum effectiveness.
The formation has an open gap for the enemy to enter which could be shut in need and replaced by another gap at a different space. The enemy who enters chakravyuha is forced to move in the direction of the center of the vyuha. As the enemy advances he finds himself in constantly difficult fighting position. The vyuha is said to be unbreakable from outside and can be broken only by entering it and then breaking it from inside.
The Vyuha is similar to the idea of defense in depth. When one ring breaks the next ring acts as the outer ring to keep the enemy at bay.
http://battledreamer.agnibho.com
Possible countermeasures: I think the following methods could be used to break up such formation. 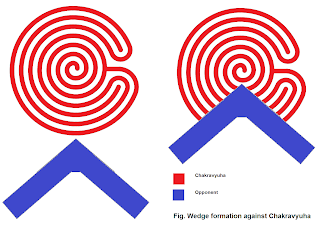 a.       Advantage: The wedge formation, once breakthrough is achieved, could exploit the gaps between two subsequent lines to destroy the enemy in detail. It would also prevent encirclement by the enemy and provide good support for own troops while doing heavy damage to the opponent.

b.      Disadvantage: The enemy could use the internal lines of the chakravyuha to reinforce the part of the line under attack which could prevent a breakthrough. Another possible advantage of chakravyuha can be the rotation of troops which would exchange fatigued troops with fresh ones. 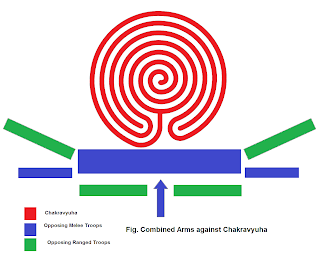 a.       Advantage: This tactics can weaken the chakravyuha without ever entering it. The core of the tactics is to simply hold off the enemies while wearing them down by missile weapons.
b.      Disadvantage: The chief disadvantage is the prolonged time required for the tactics to destroy the chakravyuha. Due to this it could degenerate into a war of attrition. The most dangerous disadvantage of this combined arms tactics is the proper training would allow the troops of chakravyuha to quickly form another formation and to destroy the opposing line.
http://battledreamer.agnibho.com
http://battledreamer.agnibho.com
I shall continue to add more tactics to this list as I find them out.